This article is based on Zack’s recent presentation for the NW EcoBuilding Guild’s “Net Zero Innovations” panel that took place in Seattle on October 22, 2014.

“When we build, let us think that we build forever. Let it not be for present delight nor for present use alone. Let it be such work as our descendants will thank us for.”

Ruskin captures the notion that we should be building for future generations.

This concern with the future impact of what we build today also infuses our second connection with sustainability: concern about climate change. The pie chart below from Architecture 2030, based on data from the US Energy Information Administration, shows that nearly half of US carbon dioxide emissions comes from our buildings. 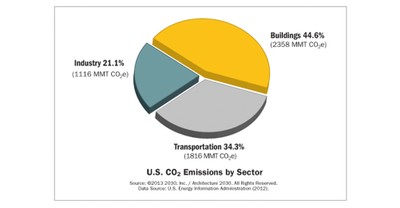 So, as builders, we have both the responsibility and the opportunity to be part of the climate solution, to help transform the ways our buildings perform.

This understanding of sustainable construction as a combination of durability and performance drove us to become high performance builders. This excellent illustration by Albert, Righter & Tittman Architects in Boston charts the evolution in building practice from the 19th century to present day: 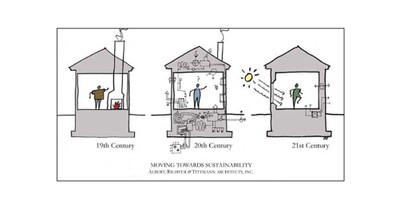 On the left we see a standard wood framed house with thin, leaky walls (“walls gotta breathe!”), no insulation, and a raging fire to help keep the occupant warm. In his sweater, he looks fairly content, but if he walks a few feet away from the fire he’s likely to be chilled by drafts slipping through the walls. Comfort and energy efficiency are not strengths of this type of construction. But the house does function okay as a durable system. Thanks to all the thermal energy flowing through the walls, the building envelope can get wet every winter and then dry out every summer. Building failure is rare.

In the 20th century we take that same 19th century house but jam it with a bunch of gadgets and gizmos in a bid to make the thing more comfortable. We may add some insulation, too, though without an understanding of building science this risks moisture problems and building failure. Is the occupant comfortable? It’s an open question, hence that question mark over his head. Plenty of fossil fuels still need to be burned to make this house work. We’re far from an optimized solution here.

Fast-forward to the 21st century and the promised land of high performance building! Now we’re actually beginning to build differently, emphasizing simplicity over complexity. We’ve got thicker, super-insulated and airtight walls; high performance triple-paned windows; smart solar design that lets in lots of daylight and solar gain; and, thanks to the low heating demand created by this high performance envelope, small super-efficient mechanical equipment can heat, cool, and ventilate the space. The occupant is not only comfortable, she’s healthy and happy, dancing a jig or something. Add a solar array to the roof and we’re well on our way to net zero energy building.

IS SOLAR REALLY “ALL THAT?”

About that solar…time to air some past biases. Many high performance builders have viewed PV panels with skepticism, as “eco-bling” that distracts us from more important cost-effective investments in building performance. We’ve worried that solar panels can become an excuse for crappy building. Why invest time and energy in building a high performance building envelope if you can just slap a bunch of solar panels on a building and call it “efficient”? And then there’s the commonsensical critique of solar that it generates energy when we don’t need it. Don’t we need energy in the winter to heat our houses, after all?

Take a look at the graph below and you’ll see that the whole “eco-bling” critique is oh-so-2008. The graph, taken from the US Department of Energy’s (improbably named) “Revolution Now” report shows that the price of PV modules in the US has fallen by a staggering 76% between 2008 and 2012. 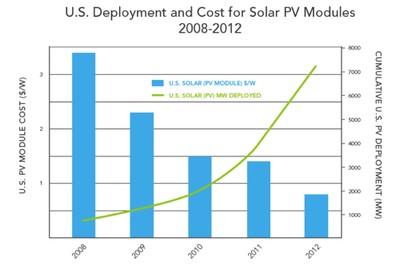 Furthermore, as reported by The Telegraph’s Ambrose Evans-Pritchard, the DOE expects the price of solar-generated electricity to fall by 75% between 2010 and 2020 and to reach grid parity with new coal and gas power plants sometime during that time. The reason for this sanguine view is depicted in this bar graph from the Institute for Local Self-Reliance: 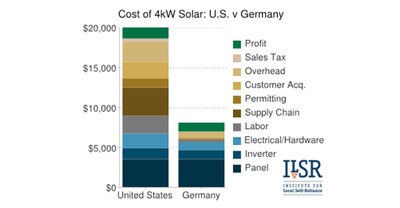 The two bars compare the cost of delivering a 4kW solar array in the United States versus Germany. A close look will show that the price of the PV modules and inverters are identical in the two countries. And profit is essentially identical as well. But all the “soft costs” associated with solar panels are huge in the US compared to Germany; things like marketing, permitting, supply chain, labor, overhead, etc. This suggests there’s lots of room for further price reductions in the US. And according to this recent Rocky Mountain Institute paper, “Reducing Solar PV Soft Costs: Focus on Installation Labor,” there’s reason to believe that we can drive those soft costs down so far that we can actually beat the Germans.

SOLAR PRODUCTION WHEN “WE DON’T NEED IT”?

Okay, so solar is getting really cheap. But what about that commonsensical assertion that solar generation happens when “we don’t need it”? This question prompted a mini research project for me. The “net energy” premise of net zero or net positive essentially treats the electric grid as a big battery. We “charge” the battery in the summer with the excess energy generated by our solar panels and then we “draw” from the battery in the winter when our panels are generating very little energy. So the question of whether “we need” the excess generation from our panels in the summer is actually a question of whether “the grid needs” it. Is there demand for that electricity in the summer and will it offset dirtier electricity generation, like from coal or gas powered plants? Or are we just overproducing at a time when no one needs our extra electrons?

To address this question, we need to understand what our grid is. We’re part of the Western Interconnection, a grid that includes the western portion of the US plus Alberta and British Columbia: 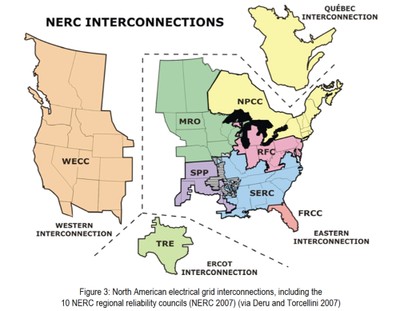 So while in Seattle and Portland we’re getting our electricity from utilities that generate much of their power from hydroelectric dams, we can’t look at our power as an isolated island. In fact, we’re part of a much larger pool of electricity generation, including lots of “dirty” electricity generated by the burning of fossil fuels. So, if we put a unit of electricity back into the grid with our solar panels we in theory can offset dirty electricity elsewhere that is being generated by greenhouse gas-belching sources. Granted, it’s complicated, with questions of line loss, grid balancing, and more. But the basic notion that more “clean” electricity will allow us to remove dirty electricity from the grid still holds.

So what does the mix of clean and dirty electricity look like on our grid, and how does it fluctuate between summer and winter? To find out I went to the US Energy Information Administration’s website and used its Electricity Data Browser. And, with the caveat that a little knowledge can be a dangerous thing (we’re building energy experts, not energy grid experts), here’s what I found: 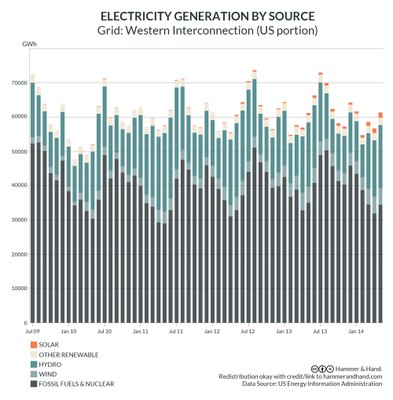 This graph shows several years of electricity generation across the US portion of the Western Interconnection grid. At the tip-top of every bar is a sliver of solar generation, followed by “other renewables” like geothermal and biomass, then hydro, then wind, and finally fossil fuels and nuclear. What’s obvious is that every summer there’s a big spike in electricity generation, and that spike is driven by a ramping-up in production by dirty power. Why? To meet big spikes in demand for power each summer. This graph shows how the price of electricity spikes every summer in both the Pacific and Mountain states: 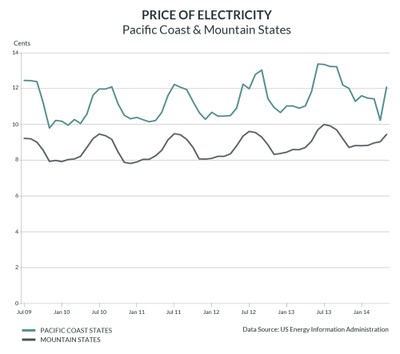 As it turns out, summer solar production is happening EXACTLY when “the grid needs” it. And it will do so for a very long time – we are far from the point where we have so much solar production that we’re overproducing in the summer. It’ll be a happy day when it comes, but not something we need to worry about for quite some time. Especially when you consider that our vehicle fleet will be transitioning more and more to electric vehicles. This graph from the US Department of Transportation shows that vehicle miles traveled spikes during the summer, so the spikes in summer demand in electricity will only increase. 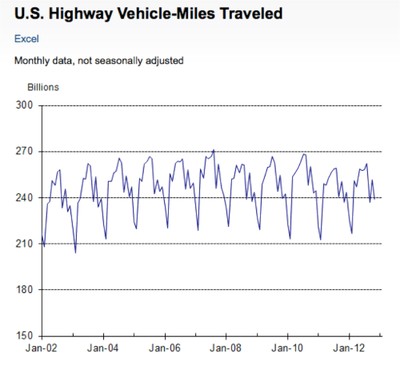 Our clients know that solar makes sense, and are demanding PV systems for their projects. Karuna House employs a 10kW array to achieve net positive energy: 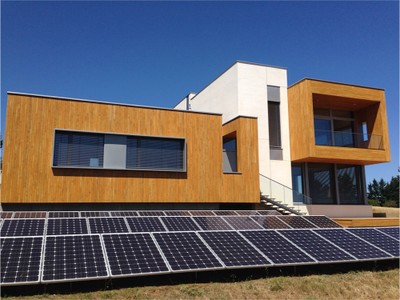 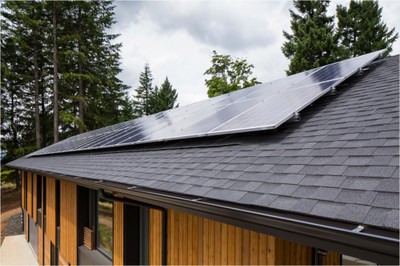 We’re surrounded. Our Seattle office is at the Bullitt Center, with its famous rooftop solar array that makes it net positive energy. And our colleagues at the neighboring International Living Future Institute office are world leaders in promoting net zero energy building. 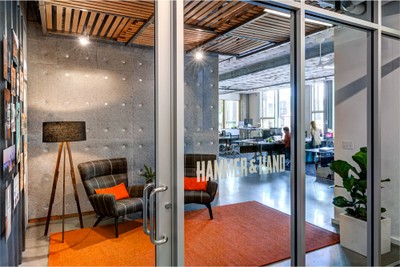 And our new clients are increasingly expecting solar. The Madrona Passive House, currently under construction, will feature a solar array, and the client is currently deciding whether to make it large enough to reach net zero energy. 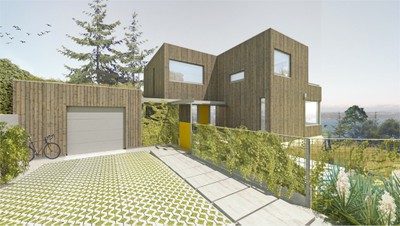 So we’re convinced. The time for solar has arrived. But only if we focus first on conservation. The envelope still matters…a lot.